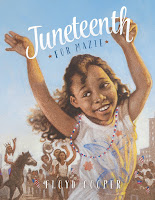 I make a lot of mistakes. Because of the nature of my work, I often make them publicly. I get the hymns wrong, completely forget that I'm supposed to be on prayers on a particular Sunday, mix up the order of service. I feel like it's almost my calling card at this point. And thanks be to God, my congregation is so gracious with me when I mess up. I count on them to call me out so that I can make up for and repair the mistakes.

This week in worship, my really dumb mistake was bringing a story Juneteenth to a children's time in May (if this is the first you've heard of this holiday read more here). Of course, Jonathan stood up and took credit for the mistake; it was his suggestion that because Sunday was the nineteenth, I should read a Juneteenth book. But duh! I knew it was May, I just didn't make that connection. So I was embarrassed. And y'all were gracious as usual. And I read the book Juneteenth for Mazie by Floyd Cooper anyway.

The other mistake that I made with this book, when I talked about enslaved people, was the softening the language I used to describe enslavement. I can't remember exactly what I said but it was something along the lines of, "Black people weren't treated fairly and weren't treated kindly."  I did not address the cruelty, violence and degradation of being enslaved.  I was called our after reading this book. Called in, actually. A term I've come across recently, which I like. I was called in to conversation that challenged me not to pretty-up slavery - or the contemporary experiences of blackness - because I think my white audience can't handle it. Even if they are children.

Even though I was the one who, after reading Jennifer Harvey wrote about having to break our (white) children's hearts so that they can experience a deeper empathy that prepares them to be anti-racist, I was trying to make the language nice and palatable for my young audience - and the rest of the the congregation as well. I floundered at the moment for how to talk about what slavery was and didn't do a great job. I also didn't to justice to the ongoing and persistent treatment of Black people intentionally and systemically because of white supremacy.

"Niceness is not courageous." Robin Diangelo says in this video about the problem with white folks thinking that being nice is the antidote to racism. Oof. Gut punch. So I pick myself up and try to do better. Be better. Have better conversations that do less harm. If you'd like to continue the conversation about Juneteenth in anticipation of its arrival next month, there are a few more books for kids you can look at in addition to the one I read. Another that I've read an liked myself is All Different Now by Angela Johnson. And you can also check out this list of Juneteenth books for young readers.

Tangentially Related Recommendation:
The television series Altanta created by Daniel Glover and the episode Juneteenth in particular, which was one of my favorites.

Follow up on Last Week:
More books for pre-k and elementary school aged kids about Ramadan and Eid, the celebration at the end of Ramadan, can be found here.
Posted by Amy Marie at 12:59 PM