Getting Creative with Bedtime Prayers 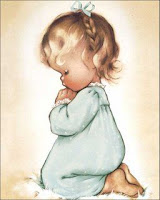 When I was a growing up, we had a rote prayer that we learned for mealtimes and a rote prayer that we learned for bedtimes.  These were both rattled off as quickly as possible, so much so that the meal-time prayer lost whole phrases over the course of time.  The bedtime prayer was a variation of the 'now-I-lay-me-down-to-sleep' prayer but ours didn't include dying before we wake:

Now I lay me down to sleep.
I pray the Lord my soul to keep.
And when I've slept all through the night,
To wake me with the morning light.

I haven't wanted to do that with Naomi.  She has ideas and thoughts of her own and actually seems eager - sometimes, anyway - to let God know what those are.  Although we've been nothing like consistent, we have tried various prayer practices at meals and bedtime.  Those have included reading (but not memorizing) short prayers like the one above from prayer books for children, sung prayers and graces, and praying aloud with Naomi to model what it means to pray extemporaneously.

To help Naomi begin to do that, a couple years ago I started with a simple version of the prayer of examine: looking back through the day and thinking of the things to be thankful for and on the other side, for those things that we needed God for.  We've done something similar with what are our hopes and what are our fears.  Sometimes Naomi has the words to say those things and sometimes she can names things and I'll pray for her and with her.  This has been especially important when she does feel scared or worried about something.

Lately, at her initiation, we have been praying silently together and then we'll tell each other what we prayed for.  I kind of like this format of prayer because it allows me to pray intentionally for her and then tell her about it.  There are times, even though this was her suggested method, that she can't settle down enough to be quiet or she gets distracted by the book beside her or just can't think of anything.

This was the case last night.  In the past I've just said, 'If you don't know what to pray for or you don't have words, it's okay.  God knows our hearts and the Bible says that even when we don't have words, the Spirit prays inside us and for us.' (Rms 8:26ff)  I stand by that.  But we all have times when we can't settle down and having a tool to pray helps us.  For me that has been journalling, writing down in whatever fragments and pieces, longhand or point form, the things I'm feeling and longing for.

Naomi is five and like any other average five-year-old still doesn't write beyond the letters of the alphabet and some basic words.  But she loves drawing.  So I had a brainwave.  I said, 'Why don't you draw what you're praying for and thankful for?'  This got her very excited.  She first drew a detailed picture of Jesus, complete with ten toes, arms wide open and the traditional sash. She then followed that with an image of me and her dad and a flower (but she explained that the flower was just a decoration, not a part of her prayer).  This may not be a new idea to anyone else, but to me it seemed like a revelation.

Being a very visual person myself, prayer is often easier to practice in imagery.  Although for me this is most often internal and imaginative, I was pleased that Naomi is embracing this method of expressing her prayers.  I'm curious to see where else it can take her, and I'm wishing I'd thought of it sooner.  Haven't psychologists have been using this method of communicating with children for ages?  It's in every crime drama featuring a victimized child.  Why not prayer?  It seems to me that in the same why that using sign language to ask for milk was a revelation for our non-verbal one-year-old, being able to communicate to and about God with images - even colors and shapes and scribbles - could be a really fun and meaningful way for non-writing or speaking children to connect to the Divine.

I pray that it may be so!


UPDATE:
Here's the picture of Jesus that Naomi drew in her prayer 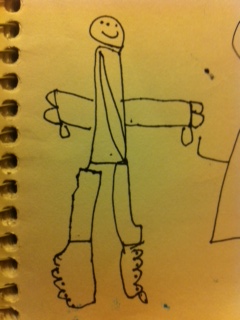 Did Jesus Sin? A response to a question about Jesus and the Syrophoenician woman

This past Sunday I told the story from Mark 7 about Jesus’ encounter with the Syrophoenician woman who asked him to heal her disturbed daughter. One of the reasons that I love this story so much is that it defies expectations and I love it when the Bible does that. Jesus is caught with his guard down.

In my reflection on this text on Sunday I noted that Jesus is unkind and offensive to the woman who approaches him out of concern for his daughter. I was challenged afterward by a family who took my reflections on the story and Jesus’ interaction with the woman home with them and responded to me with their own reflections and a question:


“We go around saying that Jesus was without sin, but in this…it seems like he at the very least made a serious mistake and in my mind calling someone a dog is pretty close to sin. Do you have a way to reconcile this?”

This is not the first time in history this question has been asked! Sharon Ringe writes about this story and she says that “It is hard to imagine why the church in any stage of its development would want to present the Christ it confesses in such a light!”*

Indeed, why did this story end up in the Bible at all? Along with others who have thought about this text, I think that the reason that this text made it into the cannon was not in Jesus’ initial retort, but in his response after he is challenged. In Jesus’ the context, the epithet ‘dog’ was common in Jewish circles with reference to Gentiles. A foreign, single, low-status woman would have had to have had quite a bit of chutzpah to approach a Jewish, male rabbi, even privately as she did. The last person we hear of who intercedes Jesus him on behalf of a child is Jairus, a high-stature religious leader who could make his request openly and in public and who could not be further from the opposite of this woman in position and stature. Jesus' retort calling the woman a ‘little dog’ could have simply a knee-jerk one based on his cultural and religious immersion. So in that case, no, to Jesus what he did was not sinful, it was in fact appropriate.

Another possibility is that Jesus was quoting that common knowledge to the woman – a test to see how she would respond. In a way saying, this is what people say about you ‘little dogs’ (wink, wink) which then allowed her the opportunity to empower herself. Based on my reading,that doesn’t fly with me. And neither these nor any other explanations of why he said what he did get around the fact that it was insulting and belittling. In Jesus’ context it may have been appropriate but even to Mark’s first readers it must have been unsettling. To us – to me – it is deeply so.

Blogger David Henson writes a powerful article about this text and racism. In our context, what Jesus says to the woman reeks of both racism and sexism. At this point in our history, I think that we would label both of those sinful both at a systematic and at a personal level. But when the woman takes what Jesus says she turns it on its head and she is also taking a common form in the gospel and turning that on its head. And in doing so she blows this whole thing wide open! Usually – in fact in every other case – when there is an argument or controversy, it is Jesus who is the challenger, responding to a hostile question or statement, it is Jesus who corrects and puts into place an opponent. Here, the woman gives Jesus pause. And in his response he does an amazing thing and escapes those cultural and religious biases and listened to her. Henson says,


“Jesus is astounded, the holy wind knocked out of him. A moment before, she was but a dog to him. In the next, the scales fall from his eyes as he listens to her and sees her for what she truly is, a woman of great faith, a moral exemplar, his teacher.

Jesus does the most difficult thing for those of us born into the unfortunate privilege of dominance or prejudice. He listens. And allows himself to be fundamentally changed.”

Sin or no, Jesus does what is so hard for all of us sinners. He opens himself to the other and to the Spirit’s work in him and through her. That is the miracle and the example Jesus offers to us, his followers. Jesus the human transcends his nature (our nature!) and the boundaries that humans create between each other.
---
*Sharon H Ringe, “A Gentile Woman’s Story” in Feminist Interpretation of the Bible, Letty Russell, ed. 1985: Westminster Press,Philadelphia PA, pp 65-72.
Posted by Amy Marie at 11:49 AM 1 comment: