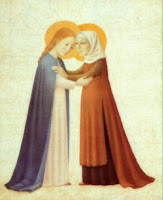 By now the Bechdel test is a pretty familiar way to evaluate whether a movie or book is good for women.  Or at least is measures the presence of women in a simple test: There are two women with names who have a conversation about something other than a man.  I wondered about this test as I prepared to preach on Mary and Elizabeth.  I have made it my business to know women's stories in the Bible and there are many women whose stories are inspiring or heartbreaking, who were integral to the arc of the narrative.  But there were not so many women across the Bible who had relationships with other women un-related to men.

The Bible is a product of it's cultural context and we get to hear a lot about men and all the stuff they say and do.   Frankly, maybe I should be a little surprised that there are any women in there at all.  As it happens the Luke story of Mary and Elizabeth just barely passes because the conversation has to do with the boy babies in utero.  Thanks to Google I didn't have to scan scripture myself.  (I appreciated both the post and the comments from this blogger).  There are only three.  Four if you stretch it to the apocrypha:

Ruth is a favorite of mine (I did name my daughter for one of the two women therein) and while ultimately Ruth and Naomi's goal is to get Ruth re-married, their relationship to each other is central.  In Mark the women at Jesus tomb discuss the problem of the stone in their way.  Mary and Elizabeth in Luke, and in Tobit a mother giving her daughter advice on her wedding day.  That's it! 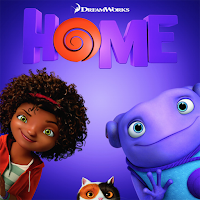 Synopsys:
A race of aliens called the Boov invade earth, sequestering all humans to Australia.  One girl is left behind and she meets an awkward outcast of the Boov.  Together they find that they can help each other and the planet in her quest to find her mother and his quest to find acceptance.

Pros:
First, I saw some interesting parallels to current conversations about race, about occupation and resettlement and with the refugee crisis and welcome of Muslim immigrants.  The Boov are motivated by fear.  They are fleeing from another alien who for a reason they don’t know is chasing them.  They seek refuge on other planets where they believe they can’t be found and terrorized.  The problem is that the way they do it is by rounding up all the people who currently live on the planet and settling them in one place.  With no attempt to build relationships with humans, both humans and Boov are fearful of each other, which means anger on the part of the humans and further (in this case humorous) security measures by the Boov.

These dynamics are played out between the two central characters, 13-year-old Tip and a Boov named ‘Oh’.  (He got his name because people always groan when he shows up).  She’s both fearful and really angry that her mother has been taken away from her. And even though he’s not well liked by his fellow Boov because he’s sort of bungling and awkward, Oh is convinced that their mission is right and that his leaders know what’s best for them and for the humans.  As Tip and Oh get to know each other they realize not only that they don’t have to fear each other but that they can be friends.  As an immigrant from Barbados, Tip can finds she can relate to Oh; both of them are outsiders.  Finally understanding each other is what allows resolution as they bring this understanding to their two worlds.

Home may be good way into talking about current issues when questions about refugees or otherness of all kinds comes up.  For example, “You know how in Home the aliens put all the people in Australia.  People have done that kind of thing to other people because we thought it was better for them.”  Or “You know how in Home the Boov were really scared, and that made them do things that we unkind to other people because they wanted to be safe?  Sometimes people act that way too.”

A second major pro in my mind is that there isn’t a lot of white skin in this movie.  The main character is a brown girl and the Oh and the Boov are an adorable shade of purple, which changes according to their emotions.  In fact people (and aliens) of color are the only characters with any dialogue.  And when does that ever happen in a movie that’s intended for a general audience and not specifically about a race-related theme??

Finally, no one is killed or has to die for there to be resolution.

Cons:
Well, the acting is mediocre and if you don’t like Rihanna or her music, this movie isn’t for you.  I was a little surprised to find that Tip, who is acted by the Rihanna was better than I thought she might be.  But it’s definitely a marketing vehicle for her music, which is all over them place as a soundtrack.  I was not really impressed by Jim Parsons as Oh.  In part it was the awkward, slight yoda-esque alien speak.  And in part, maybe he’s just a particular taste.  I was a little annoyed.

I was also kind of weirded out that the central character is a thirteen-year-old girl, but she’s acted by a woman and comes across as way older.  When you first meet her, she’s speeding off in a little red car and I assumed that she was a young adult for the first twenty minutes or so until she explicitly talks about being in 7th grade and girls being mean.

Overall:
The cons that I saw in this movie didn’t bother the kid I watched it with.  In fact, she thought it was hilarious and is always partial to movies with girls at their center.   The slapstick of Oh’s uncontrollable tentacles, the a car powered by slushees, the misunderstanding that results from a character being unfamiliar with earth and encountering things for the first time are kid-pleasers. (Drinking motor oil instead of juice? So funny).  Even preschoolers who wouldn’t get any of the message-y stuff will like the bubblegum colors and humor.  And older kids might actually learn a little something.  It’s probably not one that will be on heavy rotation for me, but I recommend it.
Posted by Amy Marie at 2:02 PM No comments: