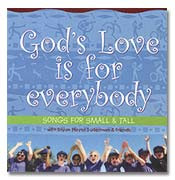 Bryan Moyer Suderman's song inspired my sermon title this week. Look at, listen to and buy his music here. His songs are great for kids. Naomi loves 'Walking, 'Walking' and 'The World Song' actually titled 'The Emmaus Road' and 'God's love is for Everybody' - also the title of the album.
Posted by Amy Marie at 11:09 AM No comments:

I was referred to this article on the BMC (Brethren, Mennonite Council for LGBT Concerns) website. A sermon by Ann Brekbill at the MC USA convention several years ago in Atlanta, at which the theme was "God's Table, Y'all Come". Some provoking thoughts about what welcome really means.
Posted by Amy Marie at 1:49 PM No comments:

What would Jesus eat?

Seattle is a little snobby about food. (Sorry friends, but it’s true, isn’t it?) It’s good that people are concerned about the environment impacts of food production and about supporting local growers and producers. It’s also good to eat food that healthier for us. I totally buy that, I’m trying to eat healthfully myself. But the other day at my daughter’s co-op preschool the parent who was on snack went out of the way to make sure that everyone knew that all the snacks were organic non-GMO. It seemed a little on the nose.

Working at Seattle Mennonite Church, I’m around a group of folks who don’t always know where their next meal is coming from, and the next bag of groceries is, more likely than not, coming from North Helpline food bank. It feels like such a disconnect to live in a city where people pay premiums for organic produce from Whole Foods when outside there's a lady who offers to recite a poem for my pocket change.

Now this is also a city at whose food banks I notice a lot of organic and local produce. Once, in the Winnipeg food bank where I worked, the majority of the delivery one day was boxes and boxes of frozen sheet cake. And maybe a few cans of pasta. (Let them eat cake, indeed!) At least here I notice a better balance of foods, including veggies from all the awesome local farms. It’s a fine and sensitive line between shopping ethically and being self-righteous about groceries when so many people wish they could afford groceries at all.

Even in the co-op, how much pressure is it on the parents who don’t make organics a priority, or who can’t afford the higher prices, to now think that to be in our co-op they need to show up with the ‘right’ kind of snack? I don’t worry too much about what the other co-op parents think of my snack, but I do walk the fine line myself. I like to make sustainable and healthful choices. And especially with meat I try to buy from animals that have been ethically and sustainably raised. But often I opt for what’s cheaper because I’m on a budget.

Is it possible to ask the question ‘what would Jesus eat?’ I’m pretty sure that eating organically wasn’t really an issue. I think he would probably eat anything that was set in front of him and pay more attention to the people at the table than what was on his plate. So for me it comes down to: make the good choices you can, share what you have, eat together, and give thanks for the food, the earth and the One who makes all things.
Posted by Amy Marie at 12:24 PM 1 comment:

"I want more Jesus," Naomi said to me this morning. Before anyone gets to thinking how holy my daughter is, know that she was talking about the small nativity scene that my mom sent us for Christmas this year. It comes with a cardboard pop-up background and six boxes that are decorated to look like gifts each containing one character: Gabriel, Mary, Joseph, baby Jesus, a shepherd and a wise man. Naomi loves opening each of the boxes taking the characters out and placing them in the scene. Along the way I try to tell the story of the nativity. And then it's time to 'clean up'; the characters go back in the boxes. We do this repeatedly. Thus, "more Jesus" is always called for after each cycle.

I try to find ways to use books and play that at least introduce Naomi to ideas about who God is an how God is found in the world. Christmas seems like a natural time to use this kind of play. It can be difficult to find resources for play and reading that are in line with my theological bent but it's hard to go wrong with figures of Mary and Joseph and Jesus in the stable. I can remember playing with the figures in my family's creche when I was a child myself.

It's a hard to balance the many other influences on our kids, not all bad, but each pulling pieces of them in other directions. I pray that Naomi will continue to want 'more Jesus' and that even though we might put baby Jesus back in his box, she'll know that Jesus is wholly un-contained and always ready to play with her.
Posted by Amy Marie at 3:22 PM 1 comment: