This may or may not be the title for my sermon this week. I was initially excited about the upcoming series at our church about healing. Yet as I began to think further on it I became more and more anxious - feeling inadequate. I have never experienced dramatic suffering, I have never undergone miraculous healing. And then I thought about the last time that I had an experience of intense pain.

When I was in labor with Naomi, I was in the worst pain I have ever felt. Now labor is interesting because really, there was nothing 'wrong' with me. I did not have a disease, I was not ill, I did not need to be cured. And yet there I was in the hospital, surrounded by nurses and doctors. I did not have a midwife, but by friend Julie and my husband Joe coached and accompanied me through the birth process. They held my hand and helped we ride the waves of pain until at last Naomi was born and my body could begin the process of healing itself.

Christ is the one who stands beside in our pain and through it births something new. Maybe a new part of ourselves, maybe a new creation, a new relationship. A friend who is a doctor in a hospice setting talked to me this morning about the different between the 'illusion of cure' and healing. So many people think that being cured is making things the same as they were before. Instead we should be seeking the newness that is possible out of an experience with pain. In hospice, that new thing is often a realization of peace at coming death. My body is not the same, to say nothing of by life, as it was before child birth. But a new way of being has been birthed and the scars and stretch marks (and flabby belly) are the reminder of a wonderful new relationship in my life.

In Mark 10, Jesus encounters Bartimeus, or 'son of honor' in Hebrew. Bartimeus is blind and a beggar - the opposite of honorable, in fact. His sits by the side of the road, calling out to people to have mercy on him. And when Jesus walks by, his cry is the same, "Jesus, Son of David, have mercy on me." What is the cry for mercy asking? For sight? For alms? For forgiveness for an unknown sin? The crowd shushes him, yet Jesus calls him near and says to him 'What do you want me to do for you? He does not assume, and when he asks for his sight, Jesus proclaims that Bartimeus' faith has made him well. Through Jesus, Bartimeus is born again. Not only into a body that is sighted, but into a life of honor and discipleship, following his healer and teacher.

Lately when I have imagined Christ, I've come up with the image of a woman. Older than me but still young, strong, gentle. She knows me but she waits for me to speak my need to her. Jesus Christ is waiting for each one of us to call out in our pain. He is waiting to accompany us but has given us the power to ask for what we want.

Sophia Christ, Wisdom of God who was present at the birth of Creation,
Be present now as Creation groans,
as we long for healing and new life.

Help us to live in eager eager anticipation of the new birth,
Even as we breathe through the agony of labor.
Amen 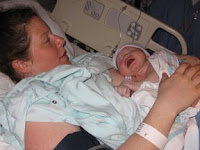