What would your super power be?

On Sunday I preached about the kinds of power we admire and long for, the kind of power of which we are in awe.  Superheroes capture many of our imaginations.  I am learning a lot about Rogue – the one from the X-Men – these days.  I’ve always kind of liked Rogue, at least as she’s portrayed in the movie franchise (I’ve never really been into comics) but having a child obsessed about something brings a new level of knowledge.

Rogue’s power is enviable in that she can adopt another’s power at a touch.  And yet she, understandably, also sees this as a curse.  It drains anyone she touches of their power and sometimes of their consciousness.  She can’t control it.  It robs her of intimacy even while it gives her great strength.  In the power Jesus wields, again and again we see him offer his power of healing to another.  Instead of taking from another he transforms what is broken, withered, captive into something whole and healed and free.  He’s the anti-Rogue.  Except that if one definition of rogue is “Not controllable or answerable; deviating, renegade” well, maybe Jesus and Rogue have something in common after all.

He is in control of his power to heal and offer release, however Jesus is certainly not answerable to any earthly authority.  His is a ‘new teaching’ and its author is God alone.  When we’re asking each other, or when we’re talking with our children about what power they would like to have consider that we already have power at our disposal.  Ok, it’s not a superpower maybe.  But we do have the power to heal, reconcile with and free each other and so do our children.

As I think about our power to heal, free and reconcile I’m reminded of the Circle of Grace teaching that the children are learning.  Central to the understanding of their Circle of Grace is knowing that all around them, the Spirit of God is empowering them to know themselves and use their feelings and intuitions as signals to understand their environment.  As children – as any of us – become more in tune with our senses and feelings, as we understand those around us we are empowered to protect ourselves and those in our midst.  It’s no force field, but it is powerful. 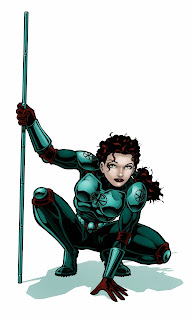 If you are interested in the direct intersection of faith/ethics and graphic novels, you may want to check out one of these resources from our library:
Pax Avalon, about a peace-making superhero with the power of God on her side.  This graphic novel written by Reese Friesen  chronicles  the city of Avalon is under siege and in her heart she knows that violence is not the solution.  There’s a trailer on YouTube here.  There is at least one further addition to the first novel in the series and a web comic that will be the forerunner of a third.

Radical Jesus: a Graphic History of Faith is by several authors and illustrators. Menno Media calls it “A compelling, graphical rendition, Radical Jesus tells the story of Jesus and his social message, not just in his own time, but also through the Radical Reformation, recent centuries, and our own time.”
Posted by Amy Marie at 2:07 PM