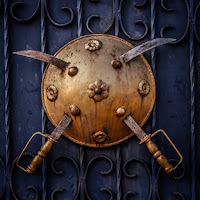 I grew up with Bible stories in a way I'm not repeating with my own children.  We sometimes will a story or two from Desmond Tutu's Children of God Storybook Bible.  But I'm not systematic and don't, as my parents did, have multiple additional bible story books or do a daily family devotional.  I'll admit that in part it's because I don't want to have to deal with some of the problematic Old Testament stories of conquest, war and (not to put too fine a point on it) genocide.  I can't even remember how my parents dealt with that.  I think maybe we just breezed over those many other people that Israel conquered and killed to enter Canaan or somehow I saw that land as empty (besides the rivers of milk and honey, that is).  I didn't see those conquered people as people.

I'm not willing to do that now - let the conquered be invisible or non human; there are too many contemporary and historical examples of oppression based in these texts for me to let it go.  So how do I approach this?  For one, I think Desmond Tutu has it right - in his retellings of the Biblical stories, he focuses on love and justice.  And many stories of the Old Testament left out altogether.  The Catechesis of the Good Shepherd, a Montessori based Sunday school program our congregation used at one time, didn't introduce the Hebrew Bible until children are at least nine - and then began with the prophets.  Early focus is on Jesus' care, welcome and love.

In the high school Sunday school class this fall we're looking at some of the stories of war and violence.  Together we're trying to examine them with some nuance.  I'm using as my starting place a curriculum called Does God Fight? from the Mennonite publisher Faith and Life Press.  Some of my takeaways from that and from my experience with these stories are these:
Do does God fight?  Well, in the Biblical narrative, yes.  If children and teens can understand the nuance of historical context and the human need to describe a God who completely and totally has their backs then maybe these stories can still have some meaning.  There are still communities of oppressed people for whom a story of a God who leads people into safety and to a home of their own is important.  I absolutely do not count myself as a part of such a community.  Instead I lean into Jesus.  Jesus who loves and blesses the the imprisoned and the weak.  Jesus who welcomes his disciples questions and chooses little ones so sit beside him.

May we always have Jesus at our side
as we struggle to be a people
who says no to violence and oppression.
Amen.
--
Photo by Patrick Hendry on Unsplash
Posted by Amy Marie at 3:27 PM