Between Voting and Veteran's Day

This coming Sunday is Veteran’s Day. For students in some schools it’s reason for military assemblies and recruitment. For many working folks, it’s a day off, intended to honor and recognized the lives of military veterans and courageous acts in wartime. But this is also the 100th anniversary of Armistice Day, from which Veteran’s Day was born. The intention of the original Armistice Day was literally a laying down of arms; remembering the cost of war and violence and working toward a peaceful future.

I shake my head to think of where the world - and especially the United States - has come since that armistice treaty and its commitment to work peaceably with neighbors worldwide. That first world war was, of course, not the war to end all wars. The United States has become the dominant global military power and the proportion of military spending in this country equals half its discretionary budget.

Having just come through another election in the US, it seems to me that progressives - including Christians, including peace-loving and justice-seeking Mennonites who would favor a reclaiming of the non-violent message of armistice - lean heavily into the idea that a vote equals a voice. Through our votes, the idea goes, we can make change and begin to align our Christian ideals with the society we live in. I did not vote in this election. Most folks know after this many years of ministry that I can’t vote because I am not (yet) a citizen. Does that mean that I don’t have a voice? 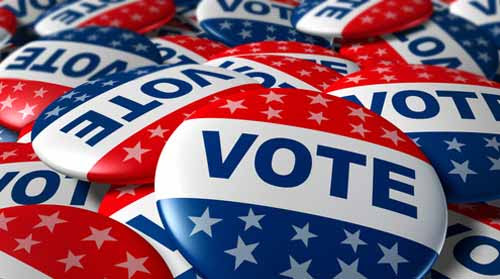 I am glad that this election is over if for no other reason than I will no longer have to see in all my social media feeds and in advertising the urge to vote, Vote, VOTE!! While I wouldn’t say it’s painful, I would say it’s a little irritating. People are not voting for many reasons. A few by choice or religious conviction - as our Anabaptist ancestors had - that our allegiance is to Christ alone (more about this in Pastor Megan’s most recent sermon). A few from disgust or apathy. But many people who would like to vote are disenfranchised, because like me they are immigrants. Because they are in jail or have committed a felony. Because of unreasonable voting requirements that amount to voter suppression.

Folks, I’m glad that those of you who could vote did. Theologian and leader Drew Hart, who identifies as an ‘Anablacktivist’ tweeted this on election day, “Voting won't usher shalom into the world, but it can curb the injustice & limit the dominance of powerful people seeking to harm the least and last of society. That's why I vote, and then continue the hard work 365 days of the year.” So I am celebrating the strides forward in representation made by women, people of color, including indigenous folk, LGBTQ representatives and leaders. And I don’t assume that just because I didn’t vote I don’t have a voice to raise for the sake of peace, for the sake of shalom building this Veteran’s Day and beyond.
Posted by Amy Marie at 10:26 AM