Reading for Hope and Justice 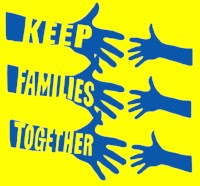 I wasn't planning on doing too many of these over the summer months. But it's been a very discouraging last few weeks, no? Stories and images of children separated from their parents after the trauma of the homes they left behind is almost too much too bear. And yet, people are somehow bearing it in their hearts and bodies every day - even here in Washington there are over 200 adults in the immigration detention center whose children are being kept elsewhere.

How on earth can we explain this crisis to our own children? Should we? As I often do, I turn to literature to help me have these conversations. I turned to a resource I've looked to for awhile and I discovered a cool new resource for parenting for justice.

Here Wee Read is an old favorite. Charnaie, the creator of this resource has several virtual stores through Amazon, including one on immigration. I found it to be a helpful bibliography of books at a variety of levels from preschool to young adult. I was unfamiliar with many, but can personally recommend Inside Out and Back Again, a story told in verse from the perspective of a Vietnamese refugee girl in the south. And The Sun is Also A Star, which is a YA novel about two teenagers: Korean American boy and a Jamaican girl on the eve of her deportation. It's a real tear-jerker/page-turner (Kindle-tapper?) love story, which I just found out is going to be made into a movie starring the star of Blackish and Grownish and a guy I didn't recognize from Riverdale. I'll be first in line.


Barefoot Mommy is my new discovery. A seminary educated social justice advocate who as a parent is putting her energy into how to raise socially conscious kids. She herself is parent to a five-year-old and a teen. This list of books has some overlap with the Here Wee Read list, but also includes discussion questions, audio of Story Corps interviews with immigrants and video of a young woman talking about being separated from her father by ICE. From there she links to other resources as well, including tools (like this one) for writing letters to legislators with kids.

Finally, our local libraries also have lists of books related to immigration. I've already put a bunch of them on hold. Don't be surprised if some of them make it into children's time over the summer.
Posted by Amy Marie at 3:44 PM