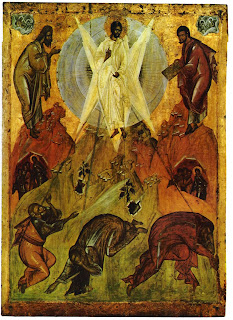 of the time, engaging Naomi in conversation about God or Jesus seems pointless; engaging her in anything that is not directly about her seems pointless. But Naomi and I had a conversation the last week about God, begun at her initiation. Although it may have been prompted by the fact that often before bed I encourage her to think back over the day and think of things that she is thankful for or that made her happy, and things that made her upset or angry. And then we (I) offer those to God. Most of the time, it is hard to pin her down even to this task.

On this bed-time occasion as we were settling in for story time, she said, with no prompting, “We can’t love God because we can’t see him.” (I did not teach her male pronouns!) Nor could God love us, because God can’t see us. I told her that God is everywhere, whether we see God or not. I reminded her of a little board book we used to read about God being everywhere we look. I also wondered to her, “What do you think God would look like if you could see God?” Her answer was immediate: “Like a big cloud.”

I was a little taken aback by her answer because we’ve never in my memory talked about this imagery for God before, and I’m not sure where she came up with it. I was also a little startled because I had just been reading the week’s lectionary text (Matt 17:1-9), the transfiguration, in which God does indeed appear in a cloud and speak words of affirmation and love about Jesus. Reading this text what struck me most was the tenderness with which God spoke of Jesus, “my son, the Beloved.” And then, how tenderly Jesus speaks with his disciples, touching them and saying, ‘it’s okay, don’t be afraid.’ Because of course they were scared out of their wits. They had no idea that God looked like a cloud, or spoke from a cloud.

Naomi asked me in our conversation if God could call on the phone or on the computer like we do with grandma and grandpa (I had said it would be nice if we could see and hear God – it would make life a whole lot clearer). The disciples had no similar expectation of direct communication from the Divine. Yet here they were overwhelmed by a vision of the revered prophets and surround by a cloud of the Almighty.

So Jesus' response to them was somewhat like mine might be to my daughter, who needs a lot of forewarning when something new happens and doesn’t take easily to change or surprises – even good ones, even when it’s part of routine. The sudden appearance of prophets from the past and God speaking from a cloud was quite a surprise and not exactly a routine occurrence in the life of the disciples. It’s a wonder that the disciples didn’t break down in screams and sobs or just plain run away the way Naomi might.

Jesus offers tenderness and instruction and boundaries. He encourages. He is not frustrated by their confusion or lack of understanding. If only my parenting were so. And thanks be to my Heavenly Parent, for being present, comforting and understanding even in my fear and confusion and misplaced intentions.